He was standing on the corner, an older gentleman wearing a baseball cap and looking every bit the part of a down on his luck Country musician.  He was playing his guitar with open guitar case in front of him.  It was the first time I've seen a drive by busker.  I was in the left hand turn lane and couldn't ever hear his music.  I could see his lips moving. I assumed he was singing.

I could hear the "boom-boom" of the bass before I saw the car or heard the music coming from its speakers.  It was an emerald green older Cadillac.  Immaculate.  Tall tires.  Chrome wheels.  It had "Big Daddy" lettered on the heavily tinted rear side window.  As the car pulled up I wondered if the driver, I'm assuming "Big D", was going to turn down the music while he waited for the light to change. As soon as the thought crossed my mind I dismissed it.  He didn't turn it down.

But, shortly, I heard a gentle beep of the big green car's horn. I watched the busker move toward the car. As he approached the passenger side window he reached out his hand and took a "tribute". He tipped his hat, walked back to his corner, and put the money in his case.

Damn! I hate it when I get caught up in my preconceptions.  A lesson I keep having to learn over and over again.

I made my left turn, but changed my plan. Instead of heading home, I turned into the Target parking lot so I could get out my smart phone and take a photo. A reminder:  Every moment is open.  And my mind?  Not as much as I pride myself. 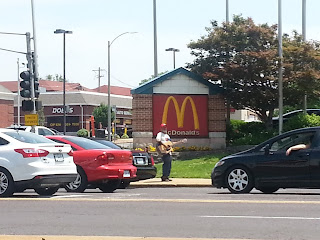