A Most Delicous Moment

While March's lion roared to the north of us, I rode to work and home in the dry. 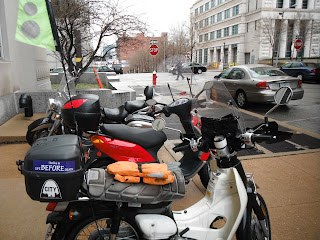 It was the familiar three in the parking area today. I wonder if Deputy D has raingear yet? If not, I suspect he got wet. He would of been riding in just about the time the rain hit Downtown. I was later and it had passed through. Timing was on my side today.

On the way home a police car followed me much of the way. I wasn't doing anything to cause concern, still I found myself getting a wee bit anxious. On the other hand, I was pleased he was doing the speed limit and following the rules of the road. This is not always my experience of St. Louis' Finest. Dusk was approaching and while Missouri law states that you should use your headlights from one half-hour after sunset the good officer turned his on while he was behind me, and it was a long while before sunset. I was impressed. I was also pleased, because I saw the potential for a most delicious moment if the opportunity presented itself.


Finally, after what seemed a small eternity he pulled up next to me while preparing to make a right hand turn. This was the opportunity I'd hoped for. I motioned for him to roll down his window and he did. And then I said, "Your right front headlight is out." He looked surprised, but quickly regained his composure and thanked me for telling him.  Heaven knows being able to tell him was more than thanks enough.


Have a great weekend.