And, it was another legitimately beautiful day here in Missouri. Tomorrow it may feel like August, but today it felt like June. 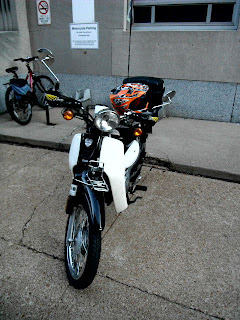 Speaking of June, it was about then when I noticed one of the regulars missing from the bike parking area. In addition the area being for motorcycles and scooters there are places for bicycles to be locked. All but one of the bicycle commuters take their bikes inside with them. Besides keeping her bike outside, this woman is different in some other ways. She isn't flashy. Her equipment is old school.

This lone rider who locks her bike up in back disappeared from the lot earlier in the summer. I knew she was still riding. Sometimes I would see her riding to work or heading home. It was clear she was taking her bike inside. The last couple of days her bike has been back in the spot I'm accustomed to seeing it.

Tonight she was leaving as I was approaching my Symba. I told her I was glad to see her back and made some comment about having been afraid it was something I said. She told me with the heat the seat of her bike just got too hot. Now it was cool enough to leave her bike back outside where she prefers it. I had thought perhaps she had joined the ranks of the folks with high tech road bikes and jerseys with all kinds of advertisements all over them. It turns out it wasn't a culture change, but rather climate change that drove her from the lot.