And, it was a warm weather gear sort of day.

It was 63F/17C when I left the cafe and headed to work, but the dew point was 58F/14C which means lots of condensation was on the windows of cars and more importantly for me... 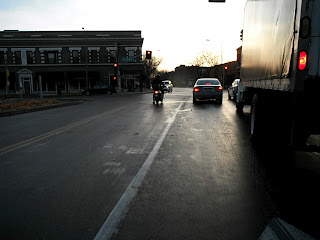 It has been ages since it rained which means oil residue has been building up on the streets just waiting to become a shiny slippery headache for those of us on two wheels. The first time I laid a scooter down was in conditions not much different from this morning. This was definitely an easy does it morning.

We didn't set a record today. It only got up to 74F/23C which was two degrees short of the record, but 27 degrees Fahrenheit above "normal".

The forecasters are saying cooler temperatures are on the way with an 80% chance of rain tonight. We've heard this before. I will believe it when I see it. I would be quite happy to ride to work in the rain.