Snow was in the forecast but I was much more concerned about the wind. 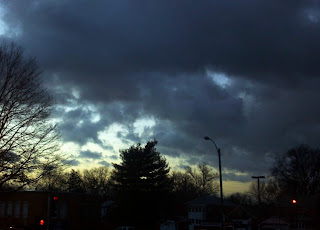 It was 56F/13C when I left the cafe. I knew the temperature was going to drop rapidly as the day went on.

As often happens when fronts move rapidly into the area the sky was putting on quite the show. 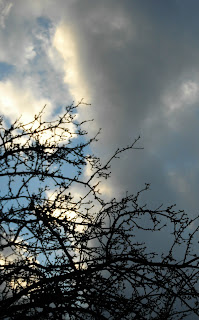 The clouds were moving, churning, and showing every shade of gray imaginable. There were even patches of blue.

By lunchtime it had turned into a rather unpleasant day.

A co-worker told me it was sleeting outside. It wasn't sleeting, it was raining slush. The temperatures were still well above freezing. It wasn't dangerous. It was just ugly. And, the wind was picking up.

One of the reasons I travel the route I do is the protection from the wind the buildings provide. I am particularly protected from those occasionally vicious west winds like were being forecast for today. The Wind Advisory was particularly warning traffic moving north and south. And, while the gusts were going to be over 40kts, I knew I would be shielded. Ironically, I was most worried about Billie, my Symba, being blown over in the parking area. Billie has always done quite well in the wind, but when my leaning her into the wind and my 200lbs/90kg is missing from her saddle she has proven vulnerable to tipping over. And, I was right to be worried.

Around noontime, I got a call from another co-worker telling me she'd blown over. He picked her up and told me she didn't look in too bad of shape. I went over and checked her out. She started up, and other than the headlight casing being dented and needing to reposition a mirror and a handguard she seemed no worse for wear. Still, it seemed like it might be a good idea to see about leaving early. I have plenty of vacation time and with my Supervisors approval I shut down at 1350CST. 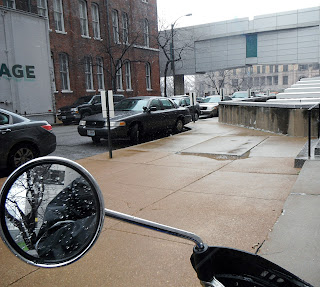 Billie was still upright when I got back to her. I'd aimed her into the wind instead of following the customary direction of parking. I suspect I should have done this when I got there in the morning. It wasn't like I was putting anybody else out.

Truthfully, the ride home wasn't all that unusual. Yes, it was raining slush, but my gear worked fine. I stayed dry and if anything I was a little on the toasty side. And, my CKX DOT approved snowmobile helmet didn't fog up even a little. Inside my gear it could have been Key West. 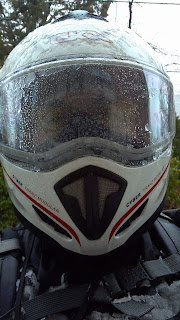