Grumpy In A Hurry Drivers

And, I had more company than normal for part of my route to work. There was an accident this morning which closed Tucker Blvd to Northbound traffic. This meant lots of grumpy in a hurry drivers were detoured onto my usual route to work. I don't think they were impressed with the four-way stops and the stoplight.

As I pulled up to the stop sign at Walnut and 11th Street I noticed one of our judges was waiting his turn to proceed through the two-way stop. I was on 11th Street, which is one way going North, and he was on Walnut which is one way going East. I came to a stop. As Judge F. began to move through the intersection an SUV came up next to me and did a pause and go. Judge F. gave him the horn, shook his head, and said something, but since I can't read lips I wouldn't want to guess what he said. There was no contact and I was glad. I found it ironic to witness a judge be as helpless to do anything about an idiot driver as I am. I wondered if he was wishing, as I do sometimes, he could get the guys license plate number and turn him in, perhaps even throw the book at him.

At lunch I saw a bunny standing in line. 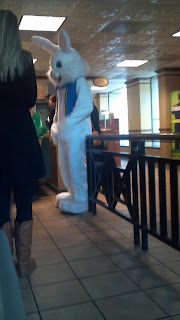 I don't know what he ordered, but it wasn't long... 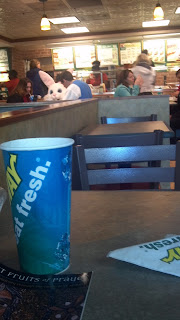 ...before I saw him sitting at a table with his head off feeding his face.