It's Summer In The City 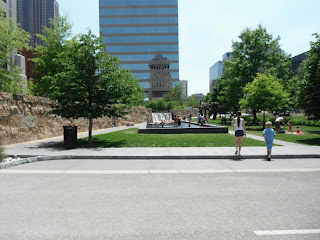 It's Summer in the City.

I, also, met S. I have seen her many times over the years. She is now riding a white Fly 150. When I first noticed her she was riding a big wheeled scooter, perhaps a People 50. I would glance up and see her move through the intersection just to the east of the parking area. Occasionally we would wave to one another. Tonight I was approaching the stop sign headed east as she approached from the south. Instead of going straight I waved her through and then turned left. I caught up to her at the stop light. We chatted briefly as we waited for the light to change. I found out she used to park in the area where I park, but then there was a change in rules and she couldn't. I suspect this happened back during the scooter boom. The first year I rode I once counted fifteen bikes and scooters in the area. The most I've counted the last two summers has been seven. I invited her to stop some evening when she sees me gearing up so we could chat some more. I hope this happens.