I rode yesterday, but wasn't expecting to ride today. Yesterday I encountered many places where the melting snow was turning into streams of water crossing the streets. The forecast called for nighttime temperatures well below freezing. This sounded like a recipe for patches of ice, and patches of ice and two wheels are a recipe for disaster. Surprise! the temperatures didn't fall off as much as predicted.

I decided it would be okay to ride. And, the only place I had any problem was in the cafe parking lot. The streets on the other hand were all bone dry. 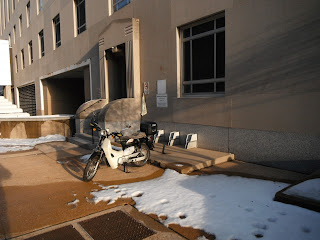 I don't think anyone bothered to clear off the motorcycle parking area after the snow storm. Fortunately the sun and warm temperatures on Sunday did a pretty good job. There were some wet areas, but no ice. 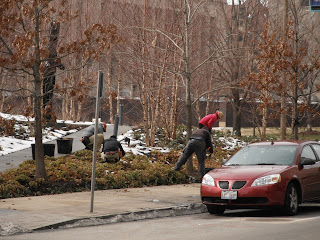 The temperatures warmed rapidly. At lunchtime I noticed there were workers in the Citygarden. 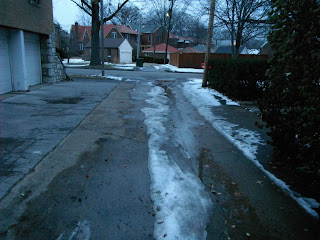 By evening even my alley was pretty much all melted.

As you may know, there is a major winter storm loose on the Plains. It appears the snowline is going to remain west and north of here. Not far from here eight to ten inches of snow and sleet may fall. Here? Rain mostly, and no snow accumulation expected. Much to my surprise there is a very good chance I'll be riding tomorrow.