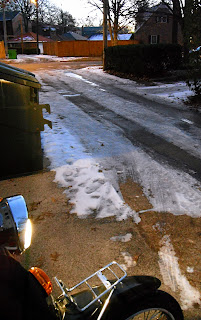 This morning my alley was much improved.

I really do enjoy these brisk December rides Downtown. A deputy asked me what was different in my genetic make-up that, "...allowed me to ride when it was so cold." I told him it wasn't a matter of genes it was a matter of having the right gear. That said, there is probably something about how I'm made that calls me out on these chilly mornings. I'm aware of others who ride in much colder temperatures. I wonder what he'd think of them?

I've been leaving a little earlier in the morning and skipping the stop at the cafe. Between the Bible Study Groups and the adding of a drive-thru, it just hasn't been as interesting of a place to spend time in the morning. I used to love going there. There was a group of us. It was a "They Know My Name" sort of place. Actually, it is where I met Heather. Alas, times change. For now, I'm enjoying some solitary time before my workday begins.

When I got Downtown the sun was just beginning to peek over the horizon. 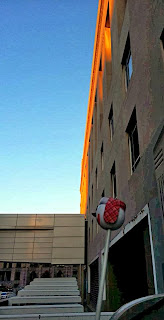 One of my favorite things about Downtown is sunrise time. I love the ways the the light plays on the buildings . . . 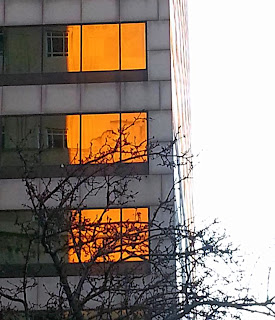 . . . and the windows, even if the windows are facing West, as are these.

It was almost toasty for the ride home.